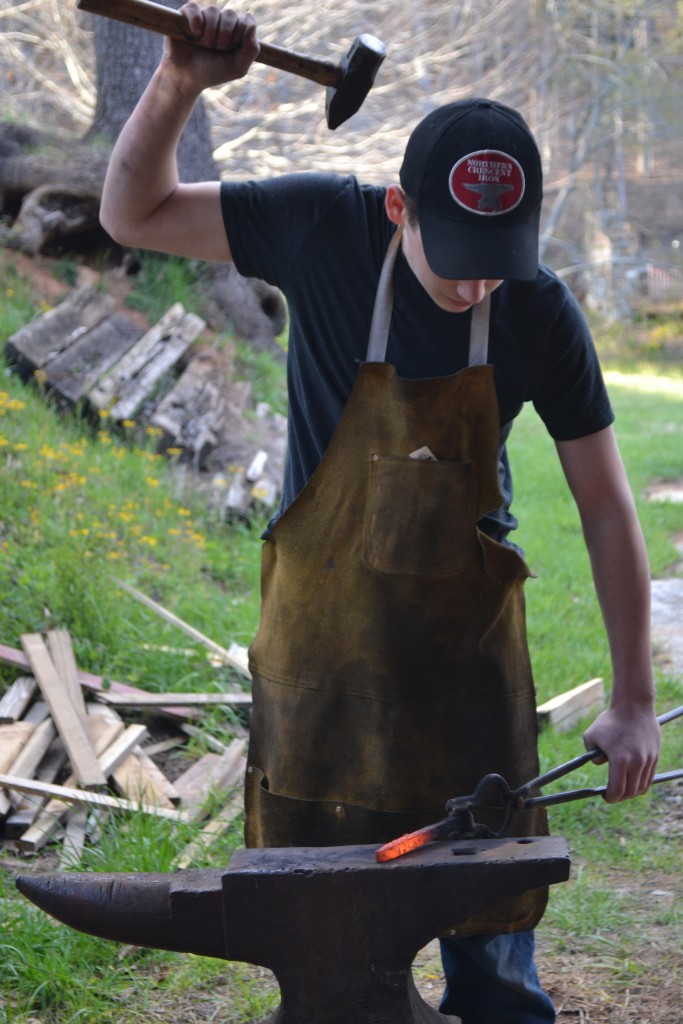 Freshman Timmy Dorn pounds a hot piece of metal to shape it into an item. Dorn has taken up blacksmithing as a hobby. Photo by Leah Dorn.

Timmy Dorn stood by his forge, the crimson embers and orange flames illuminating his face. He stoked his fire, the heat waves hitting his face in a relentless torrent of energy and intensity.

The steel glowed orange and Dorn pulled it out of the blaze, crossing the floor of his dusty barn to lay it on his 2×4 he set aside earlier. He took up his hammer in his hand and struck the steel with a loud ring and a spray of bright sparks. After hours of cutting and pounding, he held up in his heavily gloved hands the head of a ram cast in steel and polished to perfection. His best piece of art since his start in blacksmithing.

“I feel pretty good. It takes a lot of hard work, a lot of sweat, and it just takes hours to do and once it comes out and looks like how you wanted. It’s really satisfying,” Dorn said.

Dorn, a freshman at West, began blacksmithing in 2011 at 11-years-old and has produced hundreds of pieces in his homemade forge in a barn on his family’s property.

After watching a YouTube video that featured blacksmithing, Dorn decided to try it for himself.

“I think the first time I started, I wasn’t trying to do anything in particular, I just saw it and I really wanted to try it. So I burned wood with it, and I think I just used some really thin steel and a 2×4 to hammer it on,” Dorn said. “But it was really exciting when the metal was just glowing. And I knew wanted to keep doing it.”

Just as interesting as his new hobby is Dorn’s forge. Burning a fuel called green coal, coal with impurities present, he uses a forge that he built himself.

“At the moment, I don’t have a very professional set-up,” Dorn said. “All I have is an upside down lawnmower body, and a metal elbow going up into the lawnmower, and then I’ve got a grate on top of that. I just use a hairdryer or something, and it blows air up through and oxidizes the fire and makes it really hot. I welded some legs on to it. And I’ve got an old, 200 lb. anvil.”

Using an assortment of hammers, chisels, punches and files, Dorn has made mostly leaves and ram’s heads from metal that he gets from junkyards or from previous projects. Some turn out well but many don’t because of the possibility of error.

“Probably, like 50 percent, over 50 percent of the stuff I make is my worst piece to be honest. There’s a lot of room for error, and if you make one mistake, it’s hard to go back and fix it, so you just scrap it,” Dorn said. “Some of the first stuff I made was really bad. When I started doing the ram’s heads they looked really bad, they’d have crossed eyes, and like a shorter, thinner horn than the other one, a crooked mouth.”

Adding to the difficulty of blacksmithing, injuries are common. Burns and cuts occur frequently while forging, dealing with hot metal and cutting.

“My worst accident,” Dorn said, “I needed to cut open a spray paint can, so I emptied the paint can and I cut it open, and it was hanging on just a little bit so I tried to rip it off with my hands and it cut into my fingers, my middle and my index fingers, and I had to get them sewed back together.”

Though described by Dorn as tedious on occasion, funny things do happen while working with the metal.

“One time,” Dorn said, “because I also pour molten metal into molds and I make stuff like that, we were melting aluminum cans. And we had this one can that was still sealed and filled with compressed air, but there was nothing in it, and when we put it in the thing full of molten metal, it blew up, and molten metal shot up into the air and landed in my hair and burned it. But nobody got hurt, so it was all right.”

Blacksmithing is a popular activity in the mountains of North Carolina because it’s fun and a tradition of this region.

“Another reason I like the blacksmithing is because it’s a really popular thing especially out here it’s very historical if you see the blacksmith at the Biltmore or at state fairs,” Dorn said. It’s getting really popular for some reason. I guess people just like going back to the roots and making stuff by hand. It’s a good feeling knowing that you made it with your own hands.”

Dorn doesn’t sell his creations. Instead he keeps them or gives them away as gifts. Most of his work is decorative, but he constantly looks for new ideas on the Internet.

While spending all of his available time making things, Dorn learns more than just technique. He learns patience, attention to detail, time management and it gives him a valuable connection to history.

“I feel like the blacksmith was one of the most important figures in any old civilization,” Dorn said. “They made all the tools, and all the basic things you needed. They were very important, and every time I blacksmith I feel like the ancient craftsmen who did it as well. I love seeing the finished product, because you just see where all your effort and hard work went in and it looks great.”